A quantitative assessment of USAID’s community crime prevention work in Central America suggests that these programs have a significant positive impact on citizen security -- some of the first empirical evidence supporting such strategies, though plenty of questions remain about how to make these results sustainable.

The study (pdf), undertaken by Vanderbilt University’s Latin American Public Opinion Project (LAPOP), examined 127 neighborhoods in Honduras, El Salvador, Guatemala and Panama over the period 2010-2014 (see map). Based on citizen responses to survey questions in these communities, the researchers measured how much change over time in various security indicators could be attributed to USAID's prevention work under the Central American Regional Security Initiative (CARSI).

The selected neighborhoods shared characteristics that made them vulnerable to crime, such as unmet basic needs, high levels of unemployment, and a high number of youths not in school. Interventions included: working with community crime prevention committees, developing programs for at-risk youth, improving public spaces, and community policing. 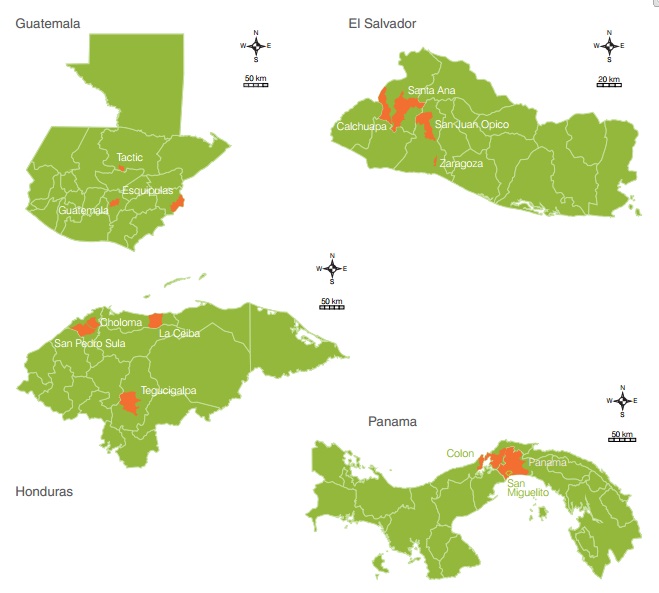 By conducting more than 29,000 surveys, the researchers found a number of positive results, including the following:

In a Wilson Center event discussing the LAPOP findings, Vanderbilt staff said a key element of the study was that it measured results of USAID’s work as the actual perceived impact on local communities, rather than based on the number of activities they were engaged in, using a rigorous methodology (see illustration). The researchers chose communities that were non-adjacent, and randomly selected which would receive the "treatments." They then developed a baseline and examined how this changed over time in both the control and treatment communities, measuring impact as the difference between the end results in the treatment communities and the predicted results if no intervention had occurred. 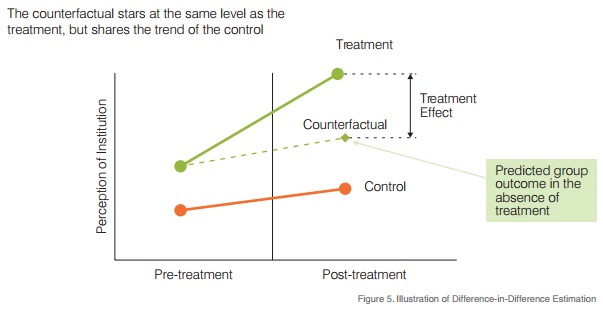 The Vanderbilt study can be held up as concrete evidence that participative, localized crime prevention strategies can work in a region heavily impacted by violent street gangs and home to the world's most violent country outside a war zone. It could thus lead to more US aid put into these programs and increase the commitment of the "Northern Triangle" governments of Honduras, Guatemala and El Salvador to such programs.

There is a consensus emerging within certain sectors in the United States and in Latin America that "softer" prevention strategies should be a component to any security policy. This has already been reflected in the goals and budget of CARSI: in FY 2012 and 2013, $16.5 million went to USAID programs in Honduras alone. And the idea that communities should be deeply involved in addressing crime and insecurity is not new. Prior local experiences in both the US and the Northern Triangle have supported the need for programs to focus on building community ties with police, investing in youth programs, and providing additional support to families.

Until now, though, there was a lack of quantitative proof these strategies were effective. Eric Olson, the Associate Director of the Wilson Center’s Latin American Program, told InSight Crime: “Many of us have assumed that prevention is a good thing, an important element of any strategy, but there really hasn’t been any sort of systematic impact evaluation of that before.”

The Vanderbilt assessment comes at an interesting moment: with the goal of securing funding, the presidents of the Northern Triangle nations recently presented the US government with a joint plan for how they will stem the northward flow of unaccompanied child migrants from their countries to the US southwestern border, who numbered more than 60,000 in FY 2014. Strengthening community-based anti-gang programs is one element of the plan.

However, even if the US were to increase its funding, a number of issues remain in regard to making such strategies sustainable and giving them long-term impact.

One obstacle is political will: while verbally recognizing the importance of citizen security programs, the national governments of Honduras, El Salvador and Guatemala largely continue to prioritize reactive, hardline policies. Even now, Honduras plans to add 1,000 members to its military police, and El Salvador's ARENA party has proposed sending 10,000 soldiers onto the streets in the areas most affected by gangs.

So far, much of the impetus for community crime prevention has come from the US, said Olson. Ultimately, whether these programs are expanded and made sustainable over time will be a question of the Central American governments' commitment to them, as well as a matter of convincing citizens -- who often advocate for authoritarian policies in situations of extreme violence -- of their value, he said.

Adam Isacson, a Senior Associate for Regional Security Policy at the Washington Office on Latin America (WOLA), told InSight Crime that another, related issue for the Central American governments was cost: these programs "are expensive and they are not necessarily naturally profitable and sustainable."

Additionally, some communities may be more receptive to these strategies than others. Isacson noted that implementing prevention programs in neighborhoods with the heaviest gang presence may be difficult, as in these places even the civic leaders may have been scared out.

Meanwhile, there are limitations to USAID's work. Olson said one missing element was social reinsertion programs directed at youth offenders and gang members, with the body currently focusing prevention work on at-risk youth. There are also issues such as a lack of coherency in the CARSI strategy as a whole, and poor coordination between USAID and other US government bodies working in the region, a Wilson Center assessment found earlier this year.

Olson and Isacson both agreed that USAID was on the right track, and that the Vanderbilt assessment was likely to contribute to building the political will necessary to see localized crime prevention strategies develop further. Nonetheless, USAID's work is "just a piece of the puzzle," Isacson said. To have a wider impact, these community-based efforts need to be complemented by state efforts to build national institutions, such as a trustworthy police force and a functional justice system -- which are sorely lacking in the Northern Triangle countries.

In the fight for Guatemala’s institutions, there is never a dull moment. Recently, and especially in the last few…

After recording the highest murder rate in Latin America and the Caribbean in 2020, Jamaica is already seeing an uptick…