Much of the South American cocaine destined for global markets flows through Brazil according a UN report, and there are a number of factors that make the former Portuguese colony an ideal launching point for the drug’s international distribution.

According to the 2016 World Drug Report published by the United Nations Office on Drugs and Crime (UNODC), Brazil tops the list of the most frequently cited countries of departure for cocaine arriving in African, Asian and European markets.

The report, which studied annual survey responses taken from destination countries between 2009 and 2014, shows that Brazil, followed by Colombia, was the most frequently mentioned country of departure for cocaine in all three regions. Peru and Argentina were also mentioned frequently as departure points for cocaine destined to markets outside the Americas.

The vast majority of the cocaine destined for North American markets is trafficked northward from the Andean region of South America, through Central America, the Caribbean and Mexico, and finally into the United States and Canada.

As InSight Crime recently reported, the UNODC report signals some significant shifts in the dynamics of the global cocaine market. Cocaine consumption in Europe and North America seems to have reached a plateau, while cocaine usage in Asia appears to be experiencing rapid growth. (The UNODC map below shows estimated rates of cocaine usage for countries around the world). 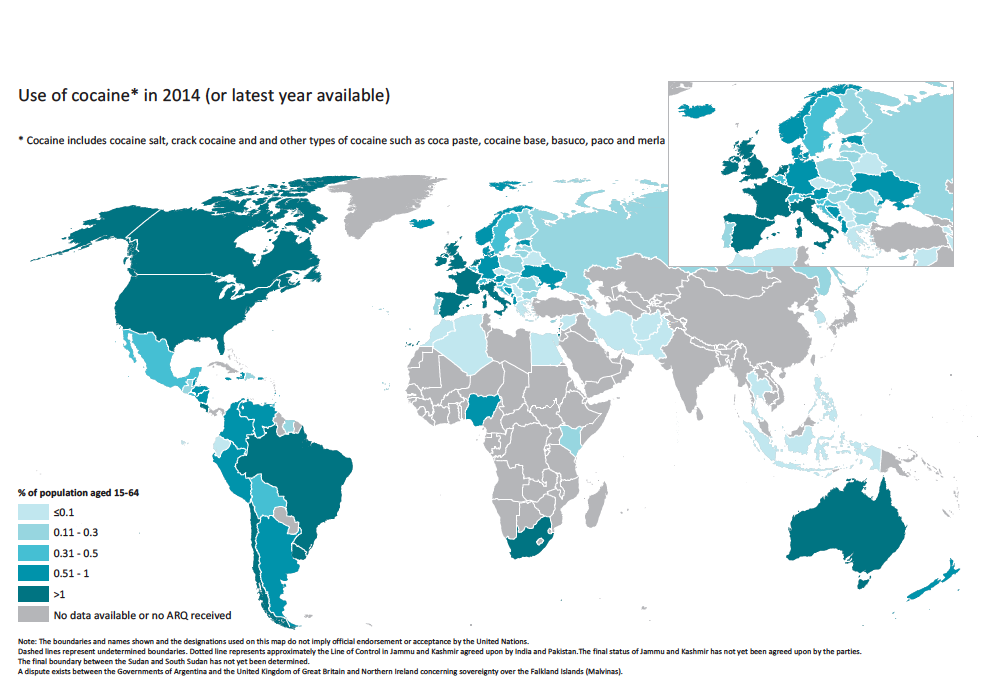 The report concludes that “the global cocaine market has indeed been shrinking,” but it is not yet clear whether this development is a short-term fluctuation or part of a longer-term trend.

Although very little cocaine production takes place inside Brazil itself, virtually all of the world’s cocaine comes from coca plants grown in Brazil’s neighbors to the north and west -- Colombia, Peru and Bolivia. And there are several reasons why Andean cocaine often makes its way through Brazil before being shipped on to international markets.

One major factor is Brazil’s status as the world’s second largest consumer of cocaine, behind the United States. Brazilian crime groups have been known to maintain a presence in cocaine-producing neighboring countries going back more than a decade. Brazil’s long, loosely monitored and sparsely populated borders allow for the relatively easy movement of all sorts of contraband, including drugs, into the country. 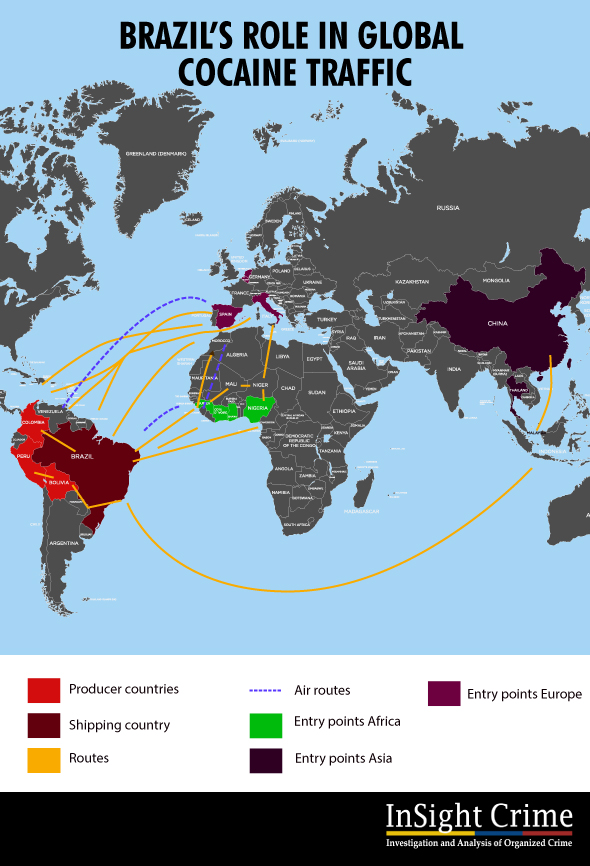 After trafficking cocaine into Brazil for domestic sale, it is likely that Brazilian crime groups use their profits to help finance the shipment of cocaine abroad. The fact that Brazil is home to some of Latin America’s busiest shipping centers, including the port of Santos, makes the country a natural staging ground for illicit products destined for global markets. In fact, according to a documentary produced last year by The Guardian, as much as 80 percent of the cocaine arriving in Europe transits through Santos.

Cocaine shipped from Brazil to Africa often continues to make its way to European markets. But there is mounting evidence that the use of African countries as transshipment points has contributed to the growth of domestic African markets for the drug. The UNODC cautioned in 2013 that cocaine consumption in Africa appeared to be growing, and data presented in the 2016 World Drug Report shows that the estimated number of past-year cocaine users in Africa has risen from just over 1 million in 1998 to nearly 3 million in 2014.

The dynamics of cocaine trafficking from Brazil to Asia are less understood. The UNODC report says the average cocaine seizure in Asia has tripled in size since 2008, suggesting that cocaine consumption in the region has risen, especially among wealthier segments of society. It is unclear whether Brazilian crime groups are making conscious efforts to break into Asian markets. But if they do decide to take such a step, they will likely have to compete with Colombian groups that appear to have already established a presence in China, which is by far the region’s largest drug market.

Op-Ed: Venezuela, The Ongoing Hurricane in the Caribbean

While Colombia bears the brunt of the Venezuelan exodus in terms of sheer numbers, several islands of the Caribbean, like…