Colombian authorities’ announcement that another important mid-level commander of the Urabeños was killed over the weekend indicates the government continues to exert pressure on the criminal group, although top commanders have so far eluded the massive security operation targeting them.

Colombian National police said that the elite Search Bloc (Bloque de Búsqueda) caught up with Gonzalo “Moná” Oquendo Urrego in Mapiripán, Meta department, on June 11 as he and some of his men watched a Colombia-Costa Rica soccer match on television, El Tiempo reported. Oquendo and four of his men were killed in the ensuing shootout. 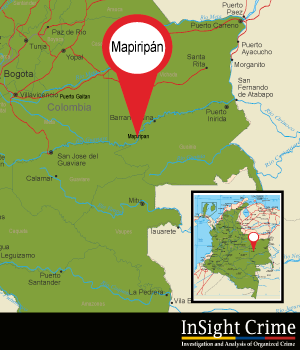 Police said Oquendo was the Urabeños commander for the plains region of Colombia. Authorities said he was sent to Meta by the Urabeños' high command to consolidate the group’s presence in the region and lead their fight with rival criminal group ‘Los Puntilleros’, El Colombiano reported.

“This structure was responsible for committing the crimes of extortion against ranchers, forced displacement, drug trafficking, recruitment of minors, and homicides in the region,” according to the Air Force, which said it helped locate Oquendo’s group and flew the Search Bloc to the area.

The Urabeños are the largest of the criminal bands (know in Spanish as Bandas Criminales - BACRIM) spawned by Colombia’s “demobilized” paramilitary movement. The neutralization of Oquendo and other mid-level figures indicates that the government’s Operation Agamenón, launched in February 2015 to target the group, has stepped up the pressure on them.

At the beginning of June, police reported that they had killed “Cero 10”, a Urabeños commander in Chocó. Over the past nine months government forces have captured or killed commanders known by the aliases Pijarbey, Calandrio, Móvil 7, and Venado, whose Libertadores del Vichada group had worked in alliance with the Urabeños.

However, the operation and its elite Search Bloc -- the police unit that hunted down Pablo Escobar in less than a year -- has come up short in locating its primary targets, the Urabeños' “Estado Mayor” or General Staff, a term that harks back to the group’s paramilitary roots.

Operation Agamenón’s failure to track down leader Dario Antonio Úsuga David, alias ‘Otoniel’ is a sign of the group’s resilience and of a degree of control over local populations. The Urabeño’s ability to amass such large amounts of cocaine within 34 kms of Agamenón’s operational base at Turbo indicates they are still doing a brisk business.

The government’s lack of success reining in the Urabeños has become an issue in the peace process. The Revolutionary Armed Forces of Colombia (Fuerzas Armadas Revolucionarias de Colombia - FARC) have made the continued strength of the Urabeños an issue in negotiations with the government underway in Havana. The guerrilla group is worried that eventual demobilization of its forces will leave rebel troops and communities in areas where they are active vulnerable to the heavily-armed criminal group.

Recent sanctions imposed by the United States on the Kinahan Clan, arguably Ireland’s most powerful organized crime group, have brought…