Colombia's Ombudsman's office says a struggle between guerrillas and neo-paramilitaries over drug routes through the Pacific department of Choco has caused a humanitarian crisis. These developments were likely put in motion by a security surge in a neighboring region.

At least five clashes have taken place in less than a week, and Jorge Enrique Calero, a director at the Ombudsman's office, said that 159 people from the town of Riociego were displaced after "heavily armed men in uniforms" occupied their homes.

A temporary camp has been set up for the displaced victims.

The fighting in Choco is likely the indirect result of security efforts against the Urabeños in their traditional stronghold, the sub-region of Uraba.

A large portion of Uraba encircles the Gulf of Uraba, which connects with the Caribbean and was used by the Urabeños as their primary international drug route. But that has changed with the launch of "Agamemnon," a police operation targeting Urabeños leader Dario Antonio Usuga, alias "Otoniel."

Headquartered in the town of Necocli -- once a primary drug-departure and arms-entry point for the Urabeños and their paramilitary predecessors -- Agamemnon counts on a force of roughly 1,500 police units and dedicated Blackhawk helicopter support. Although the operation has yet to catch Otoniel, it has succeeded in drastically curtailing Urabeños drug shipments passing through the Gulf of Uraba.

In response, the criminal group has sent a significant number of operators into Choco, intelligence sources told InSight Crime. The Urabeños are particularly interested in securing rivers such as Rio Sucio and Rio Atrato, which could be used to access drug routes on Colombia's Pacific coast, the sources added.

This has brought the Urabeños into conflict with Colombia's largest guerrilla group, the FARC, which traditionally conducts drug trafficking operations in these areas. The guerrillas have agreed to exit the drug trade as part of a possible peace agreement. However, recent field investigations by InSight Crime in the area indicate that FARC commanders are likely trying to stockpile drug money in anticipation of an end to the conflict.

So while the FARC has been willing to cooperate with and sell coca base to the Urabeños in other areas of Colombia, their conflicting interests in Choco make fighting inevitable.

For the moment the Urabeños may be benefiting from some lucky timing. Their incursions have reportedly brought them into conflict with the FARC's 57th Front, which has lost a series of commanders in recent years, including 36-year guerrilla veteran Jose David Suarez, alias “El Becerro," in March. Sources in Panama and Colombia have told InSight Crime that former Panamanian police official Jose Luis Valencia Mosquera Asprilla, alias "El Pana," has replaced El Becerro, but the 57th Front remains in disarray.

The dynamics could change rapidly however, as intelligence sources have told InSight Crime that FARC heavyweight Jose Benito Cabrera, alias "Fabian Ramirez," has been deployed to the area. Fabian Ramirez is credited with greatly advancing FARC drug operations in the southern department of Caqueta, in addition to a series of major military victories. 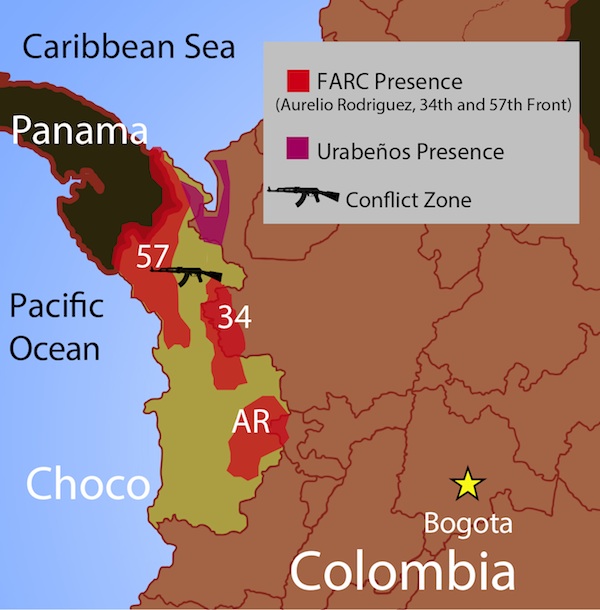 Map of FARC and Urabeños territory

Colombia has announced the official start of long-delayed peace talks with the ELN guerrillas, a move that may be intended…