A businessman in Guatemala claims he paid hundreds of thousands of dollars in bribes to buy the silence of top politicians, as a high-reaching money laundering investigation continues to unfold.

Morales told the hearing he gave the three men nearly $400,000 (3 million quetzales) "to not be denounced."

Morales, Martínez and the Barquín brothers are accused of forming a money laundering network that allegedly handled around $122.7 million (937 million quetzales) in drug money, while also funding political campaigns, Prensa Libre reported. Morales allegedly led the network which functioned from 2008 to 2011.

Morales told the hearing he had been threatened and feared for his life, asking that security measures be put in place for him and his family. He said the Barquín brothers, Martínez and another lawyer should be held responsible if anything happen to him, Publinews reported.

"I did not threaten him," Barquín told Publinews. "His testimony … is confusing to me."

Morales told the judge that he had never laundered money, but had legally traded in currency, Publinews reported. 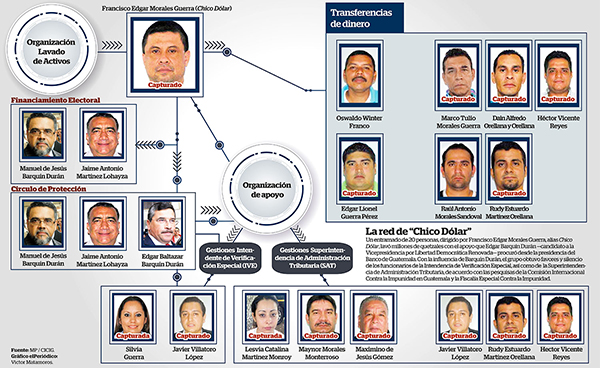 A graphic from elPeriódico detailing Morales' money laundering network, based on information from investigators

This large-scale money laundering network was dismantled in 2015 as part of the "Laundering and Politics" investigation led by the Attorney General's Office and the UN-backed International Commission against Impunity in Guatemala (CICIG).

According to CICIG's report on the case, the network collected large amounts of hard cash -- mainly dollars -- which Morales would introduce into the financial system through approximately 200 fake businesses and frontmen. The money was then wired to foreign bank accounts, disguised as commercial transactions.

Investigators say the illegal network was protected by powerful elites. Bank of Guatemala Director Édgar Barquín allegedly shielded Morales from investigation, while his brother used his own offices and assistants in congress to support Morales' activities.

In return, Morales is said to have funded political activities, including Martínez's 2011 run for congress.

Gross abuse of power to further criminal interests is an all too common feature of Guatemalan politics. The unveiling of this corruption reached the highest levels late last year, when the president and vice president were both imprisoned for allegedly running a criminal ring that embezzled millions in state funds through a system of customs fraud.

High-reaching judicial feats such as these might have been unimaginable before CICIG -- which carries out independent investigations -- began its mission against deep-rooted government corruption.

A Guatemalan court has issued an arrest warrant for exiled anti-corruption prosecutor Juan Francisco Sandoval, ending any chance that he…