Why are Peru, Colombia Coca Numbers Going in Opposite Directions?

Peru has eradicated more than 22,000 hectares of coca so far in 2016, suggesting yet another year of declining cultivation in the Andean nation even as the dramatic rise of coca growing in neighboring Colombia shows no sign of relenting.

In an October 10 press release, Peru's Interior Ministry announced that the authorities have destroyed 22,072 hectares of coca during the course of 2016. The operations have also resulted in the destruction of 85 cocaine laboratories.

Peru's eradication campaign has taken place in 16 districts scattered throughout the regions of Puno, Pasco, Huánuco, Pucallpa and Loreto. The areas with the largest amount of crop removal are Ciudad Constitución, Pasco and Irazola, Pucallpa, where eradicators have reduced cultivation by 7,000 and 2,000 hectares, respectively.

These numbers suggest Peru could register its sixth straight year of decreased coca cultivation. Peru has reduced coca cultivation by almost one-third in the last five years, according to figures from the United Nations Office on Drugs and Crime, and in 2015 the country registered the lowest amount of coca sown in the last 15 years.

The Interior Ministry's data project Peru to fall short of the record amount of coca destroyed last year, but it will likely outpace the eradication figures for every year before 2014.

On a regional scale, however, these gains have been negated by the surge of coca growing seen in Colombia. Colombia experienced a major decline in cultivation during the late 2000s and early 2010s, dropping from 98,800 hectares in 2007 to just 47,100 by 2012. But in the last few years there has been a major resurgence, with total coca growth rising by over 20,000 hectares in both 2014 and 2015. (See graph below) 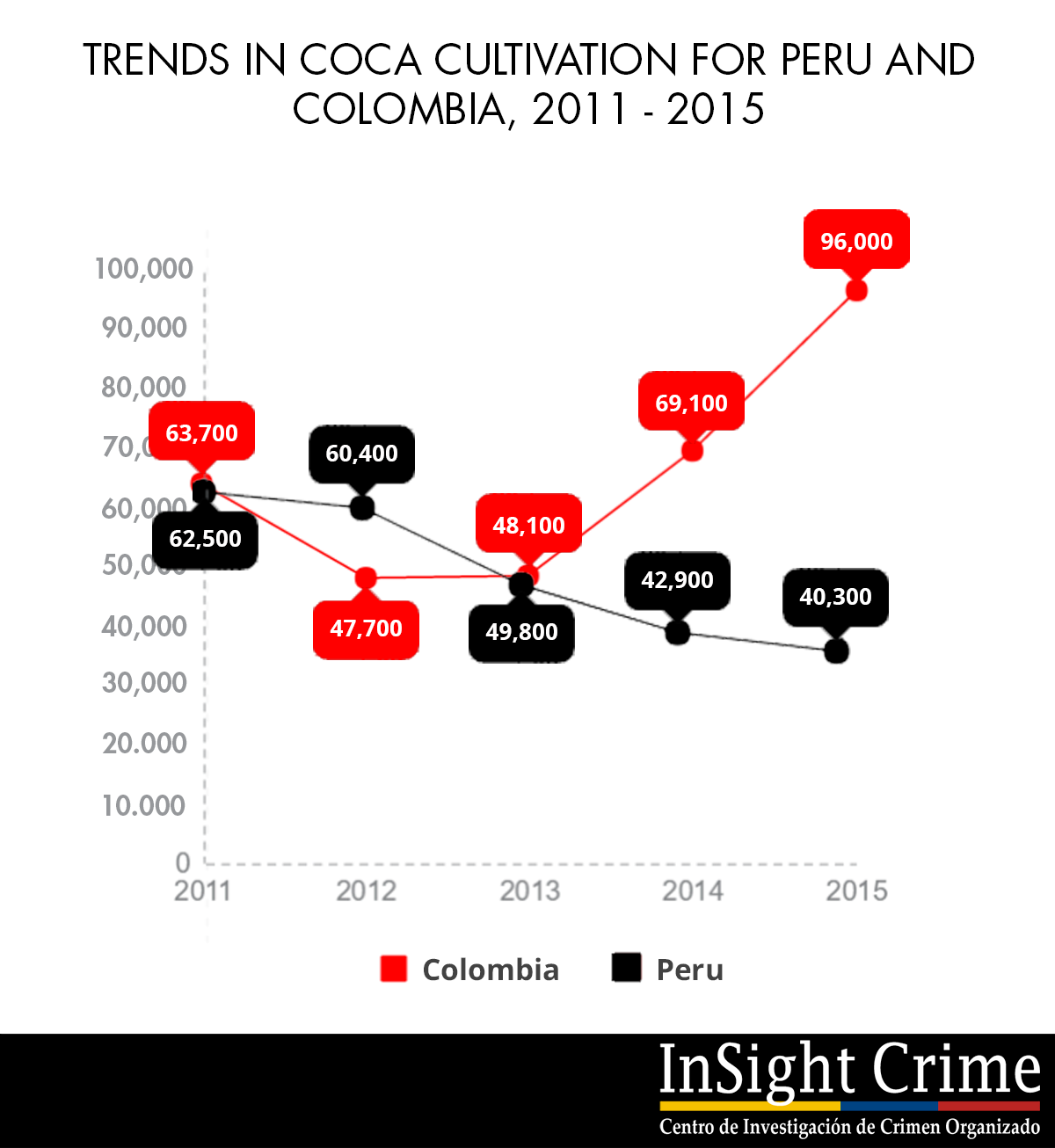 Why are the trend lines going in opposite directions for Peru and Colombia? One unavoidable answer is that illegal armed groups have control over a greater amount of the coca being grown in Colombia, which makes eradication exponentially more difficult. Left-wing guerrillas of the Revolutionary Armed Forces of Colombia (Fuerzas Armadas Revolucionarias de Colombia – FARC) oversee up to 70 percent of the country's coca supply, and the rebel army is believed to have encouraged farmers to increase their harvests in recent years in preparation of a FARC-government peace agreement.

The territorial presence of Peru's Shining Path insurgent group is much more limited. The remote Apurimac, Ene and Mantaro River Valleys (VRAEM) region represents the last bastion for the group. The VRAEM also doubles as the country's center for coca production, thanks in large part to the dangers the Shining Path poses to eradication teams. Last year, the VRAEM accounted for 44 percent of all the coca grown in Peru and cultivation remained steady compared to 2014, despite a nationwide drop of 6 percent.

High levels of community resistance to manual eradication efforts may also be a factor. Colombian coca farmers carried out over 400 blockades during the first eight months of 2016, compared to over 100 in previous years. It is too soon to tell if there is a correlation between the number of blockades and eradication, since the country's 2016 coca figures have yet to be released. This fierce opposition is nonetheless a worrying sign that the Colombian authorities face significant challenges to reversing the current boom in coca crops.