A recent report examining the effect of criminal truces in Latin America is both promising and discouraging; although we have the tools to bring a measure of peace to the underworld, they are hard for most governments to swallow and can lead to even more violence down the road.

The study by José Miguel Cruz of Florida International University and Angélica Durán-Martínez of the University of Massachusetts Lowell, uses El Salvador's 2012 gang truce and the 2003 demobilization of paramilitaries in Medellín, Colombia as case studies.

In both Medellín and El Salvador, the homicide rate plunged following the implementation of the truces. The authors try to answer why these two criminal pacts were so successful at reducing violence, when previous attempts had failed. Cruz and Durán-Martínez argue that both truces contained two key characteristics that permitted violence levels to fall.

They involved the state "as an administrator" and the participating criminal groups had "achieved organizational cohesion and leadership that facilitate territorial control and strategic dependability." Essentially, the truces in Medellín and El Salvador succeeded, at least in the short term, because the state was a direct participant in the negotiating process, and the criminal groups in question had grown so powerful they had established a near monopoly on violence.

To advance their argument, the authors recount the history of unsuccessful pacts in Medellín during the 1990s. Now better known as a trendy tourism destination, at that time Medellín was the murder capital of the world with a staggering homicide rate of 381 per 100,000. Attempts to reduce violence failed, the authors suggest, because of the plethora of criminal groups generating violence and the lack of coordination among state agencies brokering the agreements.

By the end of the decade, however, paramilitary groups had consolidated their hold on the city's underworld by beating back leftist guerrillas and co-opting smaller gangs. Following a bloody war between paramilitary factions for control of the city, by 2003 the organization run by Diego Fernando Murillo, alias “Don Berna,” had established criminal dominance.

The authors attribute the 81 percent drop in Medellín homicides between 2002 and 2007 to the demobilization of Don Berna's paramilitary structures in 2003. The demobilization process was backed by both the national and local governments, which provided credible incentives (such as judicial benefits) to the paramilitaries in exchange for reducing violence. Meanwhile, Don Berna's hegemony permitted him to regulate violence and punish any transgressors.

Circumstances surrounding the 2012 criminal truce in El Salvador were quite different from those in Medellín shortly after the turn of the century. The Salvadoran criminal groups were street gangs that maintained only the thinnest of political facades -- not active participants in a decades-old civil conflict, as the paramilitaries were in Colombia.

“The government was walking this fine line of trying to use the cohesion of the gangs but at the same time didn't know how to stop" them from getting stronger.

Nonetheless, the authors found the same conditions in El Salvador's truce that brought down violence so dramatically in Medellín. While the Barrio 18 and MS13 were hardly the only gangs operating in El Salvador, the authors say they had achieved status as "national organizations." And approval for negotiations, according to the head of the Security ministry, came directly from the president, although he has tried to distance himself from the truce as of late.

In early 2012, the gangs agreed to reduce violence in exchange for the transfer of 30 leaders from a maximum-security prison to standard facilities. Homicides quickly began to drop, and by the end of the year violence levels nationwide were down by almost 50 percent.

Cruz and Durán-Martínez -- like others before them -- point to the removal of Security Minister David Munguia Payes in May 2013 as a watershed moment that signaled the beginning of the end of the truce. Munguia Payes was the truce's architect, and his removal ruptured the continuity of the government's policy toward the negotiating process. His replacement, Ricardo Perdomo, was staunchly against the truce, and homicides began to rise shortly after he took the helm.

Since then El Salvador has fallen into a vortex of violence from which it has yet to extract itself; last year the country registered the world's highest murder rate for a country not at war, surpassing 100 per 100,000.

The study's findings lay bare the Catch-22 logic governments confront when considering negotiating truces with criminal groups. They also explain why criminal truces remain a third rail of Latin American politics, despite their potential for having a huge impact on homicide rates.

Truces present a paradox because, as the study argues, in order for them to result in reduced violence criminal groups must possess a certain level of cohesion and discipline. This criminal evolution can cause its own set of problems -- including an eventual return to higher levels of violence.

If that cohesion does not already exist, authorities are put in the uncomfortable position of helping the gangs achieve it in order to facilitate negotiations. And that is exactly what El Salvador's government did, according to Luis Enrique Amaya, an international consultant and investigator on security issues. 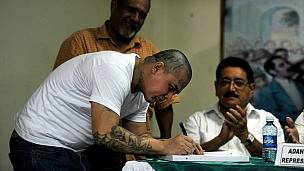 Helping strengthen the gangs in order to be able to put a truce in place carries obvious risks. In addition to accelerating the gangs' development into a more sophisticated criminal organizations, it can instill in them a new-found sense of political awareness.

“The government was walking this fine line of trying to use the cohesion of the gangs but at the same time didn't know how to stop" them from getting stronger, José Miguel Cruz, the study's co-author, told InSight Crime. “And the gangs used this to strengthen their position.”

If not anticipated and adequately planned for, the consequences of more sophisticated and politically savvy criminal groups can be disastrous. Indeed, some argue the shocking level of violence El Salvador is currently witnessing is a direct result of the failed truce.

“You really need some plan to anticipate the collateral damage,” Cruz said. “And the collateral damage is this process of criminal strengthening. So you need to have in place a certain plan or mechanism to disarm and demobilize these groups. Without that, basically, in the long term you are just making them stronger.”

This is not to say the gangs' increased cohesion provoked El Salvador's current security crisis. Indeed, fragmentation of the gangs following the breakdown of the truce is believed to be a significant driver of the ongoing violence. But the bad terms on which the government ended the truce, Amaya told Univision in 2015, left the gangs bitter and ratcheted up the aggression between them and the security forces. The result: a veritable low-intensity conflict that has shown no signs of abating.

The high stakes that come with truces help explain, in part, why governments are so reluctant to directly involve themselves in the negotiating process. But the possibility of unintentional outcomes is not the only thing keeping politicians away.

Criminal truces are politically problematic in themselves. Even when violence levels were down at the height of El Salvador's truce, it was still deeply unpopular with the general public. Although it was evident the truce had reduced homicides, the gangs continued to bleed the local population via extortion.

“The trade-off for the Salvadoran people was not that clear,” Cruz told InSight Crime. “Homicides went down, but people still felt insecure, and they still felt threatened by the gangs.”

In general terms, people saw the truce as something that was aiding the same criminal groups that were mercilessly extorting them. As a result, it became even harder for government officials to show outright support for the truce, and its demise became all but a foregone conclusion.

Criminal truces are a difficult balancing act. Meeting the conditions for violence reduction outlined by Cruz and Durán-Martínez and planning a sound exit strategy can leave politicians in a precarious position. They are on much more solid footing before a skeptical public when taking a tough-on-crime approach. This helps explain why former New York City Mayor Rudy Guiliani's "broken windows" approach has gained so much traction in El Salvador.

The Salvadoran government is pushing forward with a new version of "Mano Dura," the iron fist policy it tried to little avail before the truce. Only time will tell if this version will be any more effective at sustainably reducing violence than failed hardline policies of the past.

A group of U.S. and Colombian think tanks found little progress in Tumaco, a region on Colombia's Pacific…