Guatemala’s presidential run-off is Sunday, but the country has already elected the winner: Ivan Velasquez, the soft-spoken Colombian judge who manages the United Nations-backed anti-impunity watchdog, the CICIG.

The official candidates -- Jimmy Morales and Sandra Torres -- are waging a relatively civil, if unremarkable campaign for the October 25 vote.

Morales, a comedian-turned presidential candidate for a party created and funded by ex-military officers, won the first round in September and is leading in the polls by a comfortable margin.

A longtime television star in Guatemala, his popularity can explained by his ability to talk to the TV cameras in short, concise sound bites, and his relative distance from the corruption scandals that led to the recent resignations of Otto Perez Molina as president and Roxana Baldetti as vice president.

If Morales has a plan to fight corruption or crime, he has not said so publicly. Almost every policy question thrown at him will require -- in his words -- “a study” (or two), before his administration can determine a course of action.

Torres is the opposite. She has many ideas -- especially concerning how to increase access to education and health services -- but an electorate that is not ready to listen. She was known as a strong first lady when her husband Alvaro Colom was president (2008 - 2012), and is not averse to playing politics in both the legislative and judicial branches (often with the help of an unscrupulous sister). This reminds many Guatemalans of an old guard that many would like to see removed.

Limited enthusiasm for Guatemala's presidential candidates -- as well as recent corruption scandals -- is what has helped make Colombian Judge Ivan Velasquez so popular. Velasquez is the commissioner of the International Commission Against Impunity in Guatemala (Comision International Contra la Impunidad en Guatemala - CICIG). His job is dismantling the the corrupt structures that undermine Guatemala's justice system. In particular, this has involved targeting those close to the military intelligence networks that morphed into criminal groups after the end of Guatemala's civil war in 1996.

And help dismantle them he has, leading to an 87 percent approval rating (and more than a few gushing caricatures -- see below). After stunning and ground-breaking revelations that the presidency -- specifically the vice president’s personal secretary -- was running a scheme that skimmed millions of dollars from Guatemala’s customs agency, the CICIG began prosecuting both Baldetti and Perez Molina (in separate cases), eventually forcing their resignations. 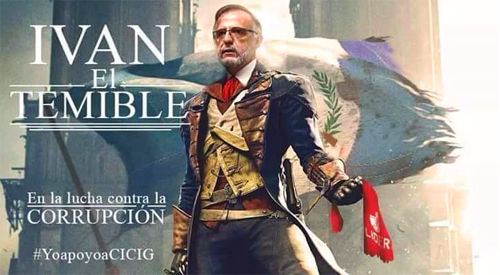 The CICIG also launched cases against a powerful law firm dubbed the “impunity buffet” for securing the release of nearly any accused criminal with a phone call; the head of the social security agency, the largest and wealthiest government body in the country, for selling faulty medicines that killed numerous patients; and an elite, well-heeled congressman who bilked money from a work contract with his bodyguards.

The CICIG also has pending cases against a former military-officer-turned-prisoner who was running the jail system from his own cell; a top-level drug trafficker from a prominent, alleged "narco" family who is charged with homicide; and a money launderer with ties to a former vice presidential candidate and numerous other longtime politicians. This last case helped derail the presidential campaign of a candidate many thought would end up winning come October 25.

And the list goes on. The CICIG revealed so many cases in the last five months that Guatemalans started talking about Thursdays as “CICIG Thursday” (#juevesCICIG), a reference to the day of the week that the commission would almost surely launch another bombshell that would shake the country’s status quo.

As opposed to previous CICIG commissioners, Velasquez was not seeking Guatemala's limelight. The judge is known for keeping his head down and taking on paramilitary-political networks in Colombia, including family members of Colombia's President Alvaro Uribe. Ousting Perez Molina has given Velasquez incredible status in Guatemala, and those now lining up to pay homage include numerous former detractors of the CICIG, including the country’s economic elite who have all but knighted Velasquez even as he has skewered some of their own.

But these cases did not appear from thin air. The CICIG has spent years honing (and significantly broadening) its mandate and retooling its shop to fit the needs and types of crimes it found in Guatemala. This meant breaking the commission into units that focus on five areas: drug trafficking, political financing, customs, corruption, and judicial corruption.

Previous CICIG Commissioners Carlos Castresana and Francisco Dall’Anese, working alongside Guatemala’s Attorney General’s Office, also helped lay the groundwork for these arrests by establishing a new means of investigation that relies more on empiric evidence than witness testimony. They also created a 150-member crime analysis unit, which helps prosecutors make cases that undermine networks as much as individuals.

Amazingly, Guatemala’s executive and judicial branches have also played roles. The executive has renewed the commission’s mandate four times, the last time just days after the CICIG revealed the case against the vice president’s secretary (although it's likely Perez Molina -- now in jail -- wishes he could do that one over again).

The international community, particularly the United States, footed the bill. Diplomats also stood by the CICIG when it mattered most, particularly during the last renewal of the CICIG’s two-year mandate in April.

Velasquez is the face of this broad network of reformers and gets much of the credit for its results. However, the reality is that the cases revealed during #JuevesCICIG will not get guilty verdicts without continued herculean effort by the CICIG, the Attorney General’s Office and, of course, the new president, whoever that might be.

Both Morales and Torres say they publicly will support the CICIG and Velasquez. When Colom was president, then First Lady Torres was a reluctant, albeit public supporter of the commission. There is little to believe that will change, but scrutiny of Torres’ sister’s record of corruption and possible ties to organized crime may quickly alter the relationship.

For his part, Morales may have less obvious connections to the underworld but his supporters -- particularly ex military personnel -- may have much more to lose with the CICIG’s continued presence than even Torres does.

In the end, both Torres and Morales may not want the CICIG looking over their shoulders anymore, but as long as Velasquez’s popularity remains high, they may have to live with it.

Since the days of Pablo Escobar, Colombian prisons have shielded criminals who continue to run their business from behind…

Two videos reveal another layer of secret negotiations between El Salvadors ruling party, the FMLN, and leaders of the three…

A disturbing new report by elPeriodico shows how the Internet is being used to target alleged criminals in Guatemala. As…