The Colombian government is doubling down on efforts to contain the expanding cultivation of coca crops, underscoring some of the persistent difficulties associated with combating the country’s illicit drug trade.

During a press conference on March 10, Defense Minister Luis Carlos Villegas said that the country is concerned over an increase in coca crops, as noted by the US and the United Nations.

El Tiempo reported that unnamed officials told the newspaper that there may now be between 80,000 to 100,000 hectares of coca in the country, up from around 69,000 at the end of 2014. (See the chart below, which uses estimates from the United Nations.) 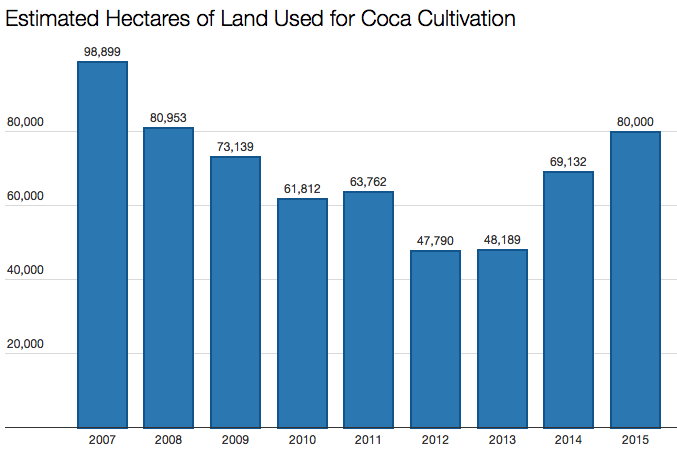 During his press conference, Villegas attributed the trend of increasing cultivation to the growing profitability of the drug trade, which has been driven by improvements in agricultural technology and greater profit margins brought about by the devaluation of the Colombian peso with respect to the US dollar and European euro.

Villegas also accused guerrilla group the Revolutionary Armed Forces of Colombia (Fuerzas Armadas Revolucionarias de Colombia - FARC) of encouraging coca cultivation. He said the guerrillas were fueling “false expectations” among farmers by telling them authorities would create development initiatives in areas where coca is cultivated, should the FARC and the government sign a peace deal.

SEE ALSO: Coverage of the Peace Process with the FARC

While the defense minister expressed concern at the rise in coca cultivation, he also highlighted ongoing efforts aimed at disrupting the drug trade. So far this year, Villegas said authorities have destroyed 52 percent more drug producing laboratories than they had during the same period in 2015. And he indicated that the government plans to increase manual coca eradication by 25 percent in the coming months.

Colombia’s post-conflict minister, Rafael Pardo, said the government will also continue to pursue crop substitution programs, especially in areas with high rates of coca cultivation. According to government data accessed by El Espectador, coca is cultivated in less than one-fifth of Colombia’s more than 1,000 municipalities, with just ten of those municipalities accounting for more than 40 percent of production.

Both Villegas and Pardo suggested that the signing of a peace accord between the government and the FARC might provide opportunities to expand on counter-drug efforts in areas currently under FARC control. As part of the peace negotiations, the FARC and the government have agreed to cooperate on tackling the illicit drug trade by focusing on implementing rural development and drug treatment programs, and pursuing high-level criminal operators.

However, the same problems that have plagued the government’s current anti-drug efforts will likely remain in place even in the event that a peace agreement is reached. Growing coca will remain a lucrative option for many farmers in underdeveloped rural areas. And criminal organizations appear poised to move in on territory under FARC control -- perhaps with the cooperation of some of the rebels -- thereby complicating government efforts to establish a presence in these areas.

The continuing increase in coca cultivation in Colombia has not gone unnoticed by Colombian authorities. But the public acknowledgement of the trend by officials like Villegas and Pardo, and the reiteration of their commitment to address the problem, suggests the issue will remain a priority for the government going forward.

Ex-FARC Mafia vs. ELN: a Fight Too Far at Colombia-Venezuela Border?

The 10th Front of the FARC dissidence isn’t letting up. After simultaneously heading off multiple enemies on Venezuelan soil, the…